An army marches on its stomach - Napoleon Bonaparte

While it’s been a couple of centuries since Napoleon and his forces rolled through Europe, his most crucial, and well known, observation about the success of a military campaign, is as true today as it ever has been.

Wars are fought by soldiers, and the best way to keep a fighting force in combat-ready shape is to ensure that they’re always well-fed.

And finding an effective way to keep soldiers fed and ready to fight during the last one hundred years led to the development of the MRE (meal ready to eat) which can easily be carried, delivers the high-calorie content that an active soldier needs on a daily basis and, most importantly, tastes good.

Even though they were originally developed for the army, MRE’s, due to the longevity of their shelf life and being easy to prepare, are also a perfect way to fill the larder of your bug out shelter.

And will provide all the nourishment that you need if you and your family ever need to head to the hills in a hurry.

That’s why we’ve found the best MRE’s that you use to keep the cupboards of your chosen retreat filled and ready for your arrival should the worst ever happen.

With your MRE’s in place, if you ever need to, you’ll be able to hit the ground running, and be safe in the knowledge that you’ll have all of the supplies you need to be safe and keep you and your family fed.

So, let’s find the very best MRE’s that you can start stocking your bug out shelter with…

Hungry?
These Are Our Top 3 Picks For Best MRE Meals... 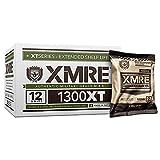 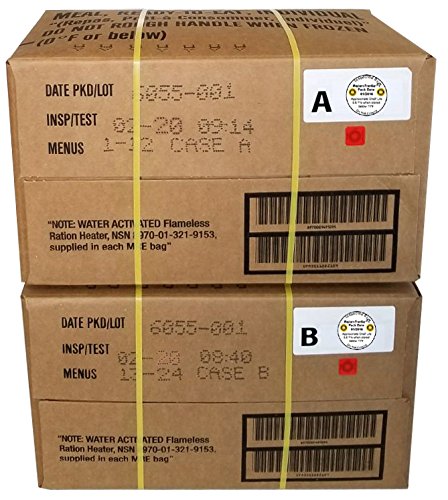 With a total of twenty-four meals that come with the flameless heaters that you’ll need to prepare them.

These MRE’s from Western Frontier are genuine military surplus that was prepared, packed, and inspected properly.

Even though they’re not a well-known name, Western Frontier has always endeavored to keep its supply chain in place.

And so far, they’ve done a great job of ensuring that anyone who needs them, can easily lay their hands on all of the MRE’s that they need.

The two boxes supplied are drawn from the A and B menu lists.

Which were designed to ensure that there was a constantly rotating choice of food available for soldiers serving on the frontline and on training exercises.

Variety is the spice of life and even though it seems like a relatively minor issue when you’re caught in the middle of a conflict, it’s the little things that can make all the difference and help you to maintain your focus.

And when you’re out in the middle of nowhere, knowing that you don’t have to eat the same thing over and over again can help to keep your spirits high and your attention focused on all of the things that really matter.

It’s almost certain that with so many different options on the menu.

You’re not going to like every MRE that you’ll find in the boxes that Western Frontier supply.

But when you’re hungry after a hard day’s work, you’ll be ready to eat whatever you can.

Twenty four choices and each is palatable and ready to go whenever and wherever you need them.

That seems like a pretty good deal to us and an easy way to keep the shelves of your retreat, and your stomach, full. 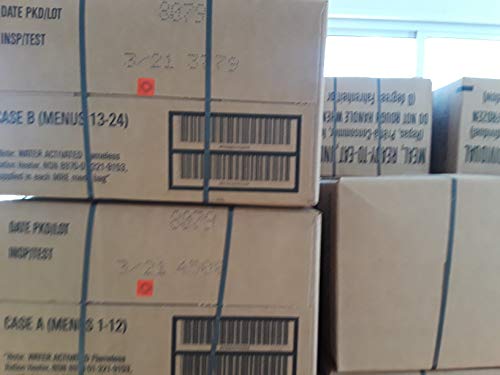 Since nineteen forty-three, Sopacko has been one of the premier providers of field rations to the US military.

Founded to keep the Army fed, Sopacko has been at the forefront of MRE production for more than fifty years and has.

During that time grown and evolved to cater to every corner and facet of the pre-packaged, shelf-ready meal market.

But the core of their business has always remained the same, the creation of MRE’s for hungry soldiers and emergency workers everywhere.

Featuring an incredibly varied menu that includes everything from a grilled jalapeno beef jack patty to meatballs in marinara sauce and spinach mushroom and cream sauce fettuccine.

Sopacko’s two cases of twenty-four ready to eat MRE’s have been formulated and prepared to satisfy even the most demanding, pickiest diners.

While they follow the standard A and B menu option that’s part and parcel of military life, Sopacko has ensured that their menus are creative and different.

Which proves that even when it comes to MRE’s, you never have to be satisfied with less than the absolute best.

Any company that has been in partnership with the military, and has been consistently supplying them with anything, for more than half a century is the sort of brand that you can completely put your faith in and depend on.

It takes a special sort of commitment to keep generations of soldiers fed.

And Sopacko’s commitment to the armed forces is the sort of application that we should all be supporting in the good times and the bad. 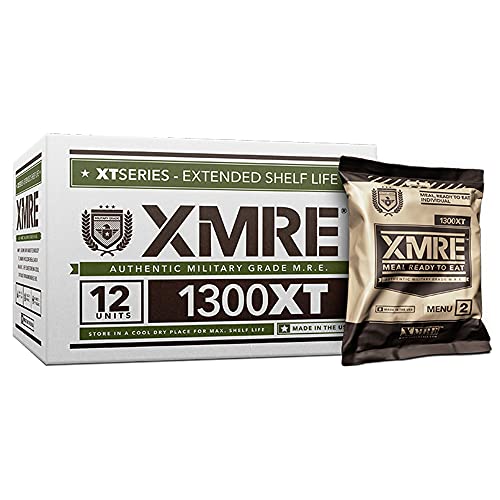 A veteran-owned business that was founded in Arkansas in two thousand and sixteen.

And that’s why their battle-tested items are ideal for hikers, campers, and preppers alike.

All of the MRE’s in the box are field-tested and fully cooked so they’re ready to eat straight out of the bag.

Always freshly packed and with full nutritional information printed on the side of every packet, Ozark’s MRE’s were formulated for the military.

But can also easily meet all the demands of the civilian market.

With a shelf life of at least three years, Ozark Outdoorz has made sure that their MRE’s are ideal for the safety-conscious prepper who likes to think ahead and plan for every eventuality.

Every MRE is packed in high-density water and tamper-proof bags and comes with an accessory kit (that includes coffee and a military-grade spoon) and a flameless ration heater (FRE).

Ozark Outdoors has covered all prepping food bases with this military-ready MRE kit that is easy to store and secure anywhere you need to. 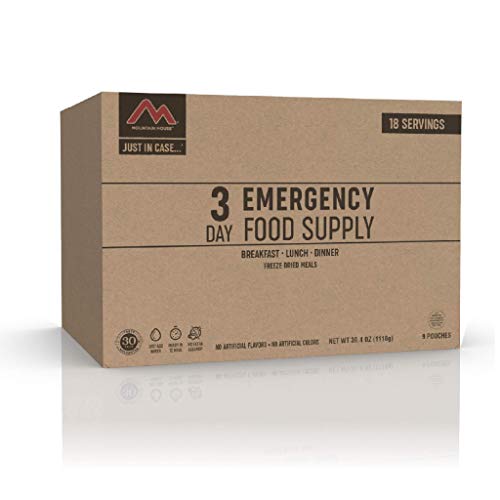 Mountain House can trace their roots back to the meals that they made for the Special Forces teams who served in the war in Vietnam.

At the time of the conflict, the military put out a request for meals that tasted better, weighed less, and lasted longer than standard rations.

So this Oregon-based company stepped up the plate and the rest, as some wise soul once said, is history.

Designed to provide one thousand seven hundred calories a day for three days.

All that you’ll need to supply to enjoy the contents of this MRE kit is twelve cups of water.

These quick-prep meals are made to be eaten straight out of the packet.

All you need to do is add hot water and they’ll be ready to eat in ten minutes.

And if you don’t have any access to hot water, don’t panic as they can be prepared with room temperature water, all you have to do is double the prep time.

For half a century, Mountain House has been supplying all walks of life with their freeze-dried, quick-prep meals that have fed hungry mouths everywhere from Oregon to the North and South Poles.

Lightweight, straightforward, and easy to prepare, they’re an ideal source of meals for the forward-thinking prepper. 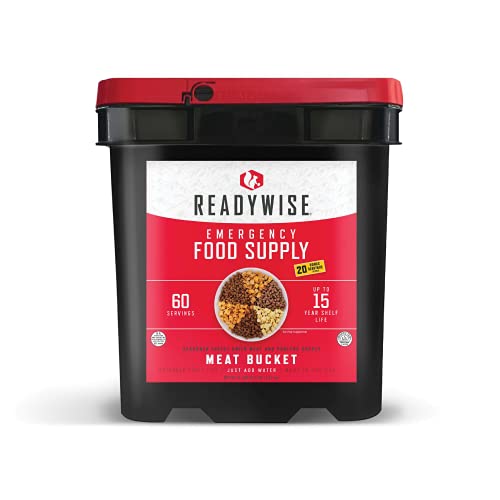 Based in Salt Lake City, ReadyWise creates peace of mind by being prepared and helping others to become prepared for any, and all, emergencies that the world finds itself ensnared in.

They believe in always being ready by always being wise, and have made it their mission to supply you with all the long term food storage and freeze-dried food that you’ll need to weather and sit out any disaster situation.

With sixty servings of beef and poultry in individually wrapped four portion packs and twenty portions of rice.

All you need to do to bring the food in this kit to life is add water and ten to fifteen minutes later, you’ll have a fully prepared, ready to eat meal.

All of the meals in this kit have a fifteen-year shelf life and have been designed to help you ride out a future that you can’t predict but can plan for.

Packed in a water and damage resistant durable plastic container that’s been engineered to be easy to store in your home, bug out shelter, or car

This emergency MRE kit has been made to make your life simple when the world outside is descending into chaos.

ReadyWise is ready for anything, and with their emergency MRE kit, you will be too.

Which MRE Meals Are Right For Me?

Given that all of the MRE’s on our list are designed to fulfill a similar objective and have long shelf lives, the two factors that should determine which MREs are the right for you are quantity and budget.

Work out your budget and determine the quantity of MRE’s that you’ll need, and then take another look at our list and we’ll guarantee that the MRE’s that are right for you will become immediately obvious.

If, however, you’re looking for a little more direction, we’d always recommend that you take a much harder and longer look at Mountain House.

They’re the brand that helped to develop the MRE for the soldiers serving in Vietnam.

And while they’re a little more expensive than most of the brands on our list, their quality, ease of preparation, and long shelf-life make them an ideal choice for any serious prepper and dedicated survivalist.

What Is An MRE?

MRE’s, or meals ready to eat, are self-contained, individual rations that were designed to be used by soldiers on the battlefield or combat situations where it wasn’t, and isn’t, possible to set up traditional mess facilities.

Originally developed for long-range patrols and Special Forces teams during the war in Vietnam, MRE’s replaced the standard tinned rations that most soldiers were used to at the beginning of the nineteen-eighties.

With an almost infinite number of different menu options available, MRE’s are a versatile, adaptable, and flavor-filled way for frontline soldiers to get all of the calories that they need to successfully operate and perform their daily duties.

Since their introduction, MRE’s, due to their longevity and lightweight design, have also found a successful secondary market among hikers, campers, and survivalists.